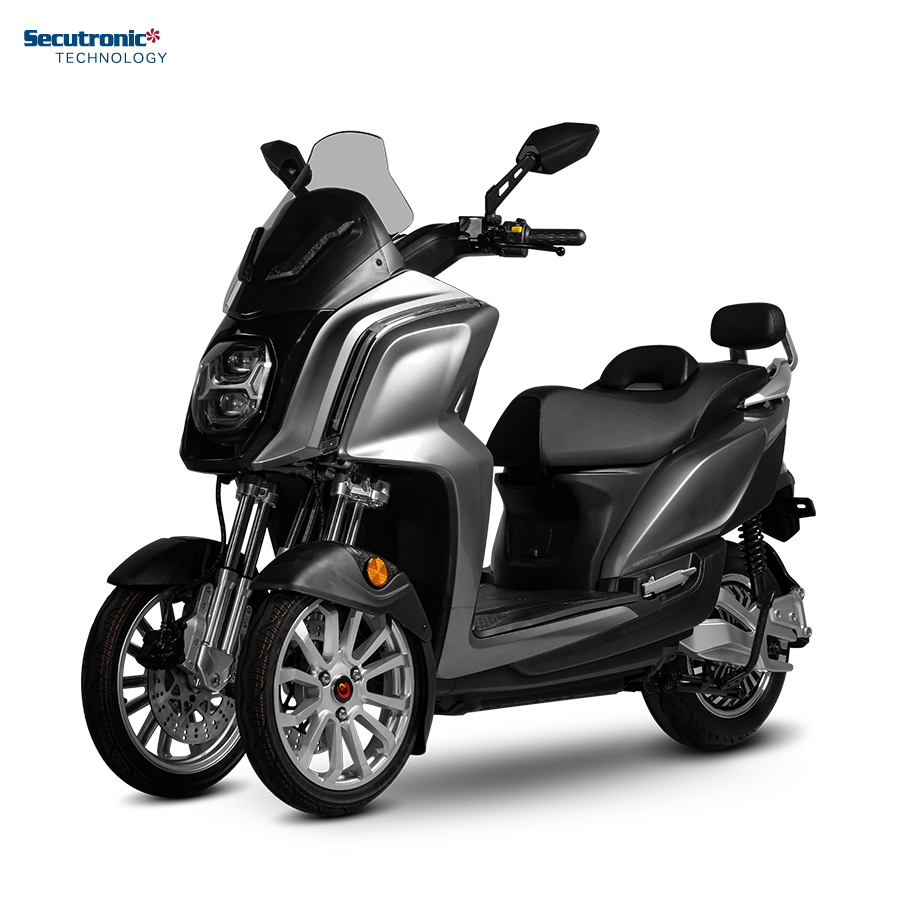 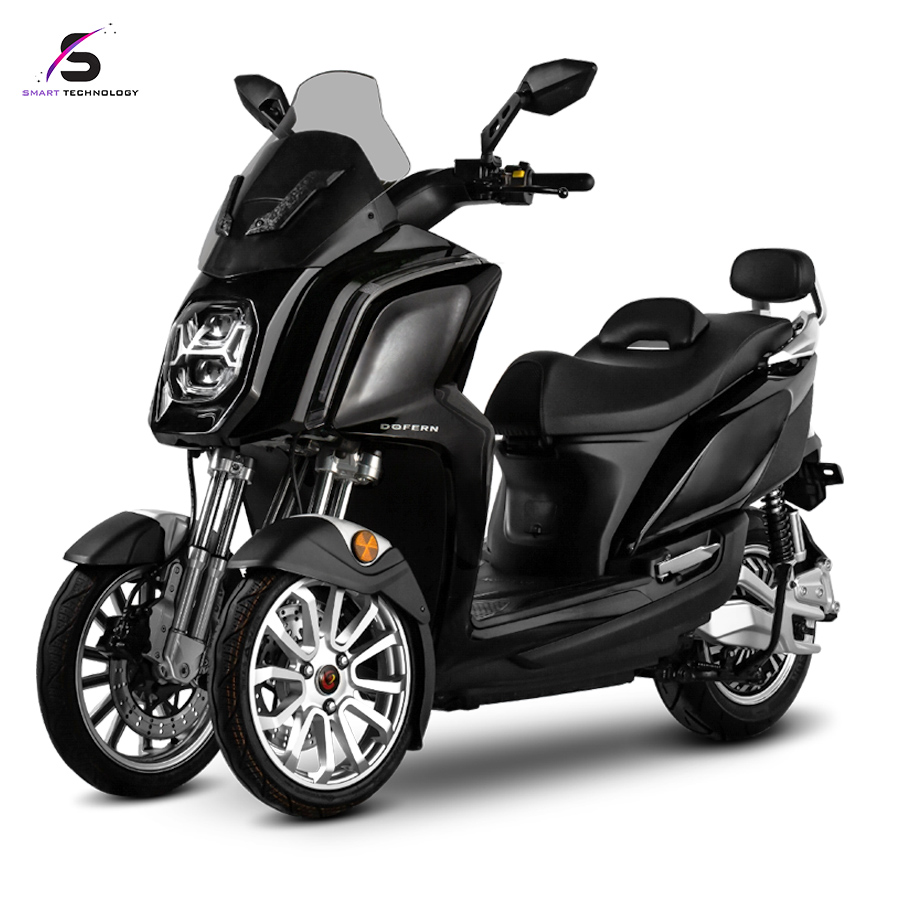 What are 3 wheels motorcycles called?

Tricycles are presented as an interesting alternative for those drivers who want to make the leap to the world of motorcycles.

Although motorcycles are cheaper than cars and their movement around the city in traffic jams is faster, there are still many who are reluctant to use this means of transport. The main reason is the feeling of insecurity at the possibility of losing balance. To fill these gaps, the three-wheeled motorcycles emerged .

The first model to incorporate two front wheels was a scooter created in 2007 by the Italian brand Piaggio . His goal was precisely to provide his vehicle with greater stability, so that it offered the balance of a car and the performance of a motorcycle. Since then, other brands have jumped on the bandwagon by bringing out their own models in the hope of winning over a wide segment of drivers. But is the three-wheeled motorcycle really as safe as its manufacturers promise?

The key: its three support points

The most popular three-wheel motorcycles are those with two front wheels and one rear wheel, called tadpoles . But there is also another option, even safer than the previous one, the delta or tricycle , which places its two wheels at the rear.

The front wheel of the trike allows for a greater turning maneuver than the tadpole. In addition, in the latter, the driver sits on the rear axle, which raises its center of gravity, making it less stable when cornering. However, the tricycle is able to better maintain its balance in this circumstance, since its rear part is the one that weighs the most and, therefore, has the most grip.

The main disadvantage: the price

Compared to your safety, there is the purchase price and the maintenance price: much higher on three-wheeled motorcycles than on two-wheeled ones.

For its part, the price of motorcycle insurance is independent of the number of wheels, since it will depend on the type of driver and other characteristics of the vehicle, such as cylinder capacity or weight.

On the other hand, since they have three wheels, they are excluded from the classification of motorcycles and become part of that of cars, so to drive them, it is enough to have a B car license.

Is there an electric 3-wheel motorcycle?

Some 15 years ago, Piaggio made an unusual proposal, original and criticized at the time, but which came up with a formula that in the long run has been confirmed as a success: the three wheel motorcycles.

The idea was simple: mount a second wheel on the front axle. In this way, a duo is formed that tilts simultaneously, which considerably increases the stability of the motorcycle and transmits greater safety to whoever is at the controls.

This makes it easier for novices to transition between car and bike. In addition, these models usually have a system that blocks the front axle and makes the motorcycle stand on its own.

Although they provide these advantages over a conventional scooter, three-wheel motorcycles also have certain drawbacks.

The first is that as a general rule they are more expensive than a two-wheeled model of equivalent displacement and power.

The second is that they have a higher weight, so that with the same engine, their performance is lower and their consumption is higher.

This is in line with the third of the disadvantages, since due to their volume and weight they are less agile than a conventional scooter.

The fourth problem is that, legally, three-wheelers are not motorcycles, but tricycles.

What is the cost of a three wheel motorcycle?

After almost fifteen years of development, the market niche exists and many scooter manufacturers have added at least one three-wheel model to their ranges, with an ever-widening offer of between 300 and 500cc displacement.

The Yamaha Tricity is one of the interesting options to get started in the world, since it is offered with a 125cc homologated as a motorcycle (it is therefore necessary to have three years of experience on the B license). It costs 3,999 euros and mounts a small 12 hp engine. However, there is also the 300 variant (8,099 euros), with a similar but more robust design, and backed by a 26 hp block that moves much more freely.

The Qooder QV3 (6,299 euros) is only sold with a 346cc engine and 29 HP of power, standing out in its design for fitting larger wheels than its direct rivals. Another popular model is the Peugeot Metropolis 400 (from 8,895 euros), whose engine produces 35.6 hp and 38.1 Nm of maximum torque.

Almost all three-wheelers are scooters, but four years ago Yamaha decided to turn the concept on its head by applying the format to a sports model. The result was the Yamaha Niken (16,349 euros), which has no direct rival.

Its design is really striking thanks to the sharp front mask and it is distinguished from the rest of the three-wheeled motorcycles by a different riding position, which forces the rider to adopt a more attack position. It has a hybrid frame of steel and aluminum, can be tilted up to 45 degrees and mounts a powerful 115 hp and 847cc engine.

1.Hill Decent Control(The speed of scooter could be affected by gravity and easily out of control when driving downhill.But this function will make the scooter drive just like on flat road.Speed will be only controlled by your throttle.)

2.Auto Stop when release the throttle

3.Auto Lock(Motor will lock itself when speed fall to zero.)

This three wheels motorcycle with a double front axle is a new version 3 wheeled electric vehicle that will precede a 100% electric production version.

Up to 200 km of electric range

The three-wheeled French scooter suitable for the B license is one of the best solutions for moving around the city quickly and safely, but it looks to the future looking for new, cleaner and more efficient solutions.

We miss that the brand has provided a greater amount of information because it has hardly released any useful data. What we do know is that its weight is lighter than the combustion equivalent, that it has a range of up to 200 km and that it can reach a top speed of 100 km/h.

The STD1 5000 3 Wheel Electric Motorcycle gets 5 kW powerful motor. Recharging is done through a socket located between the headlights, the 10 Ah charger is built into the motorcycle and in 4 hours it can reach 80% of the capacity. 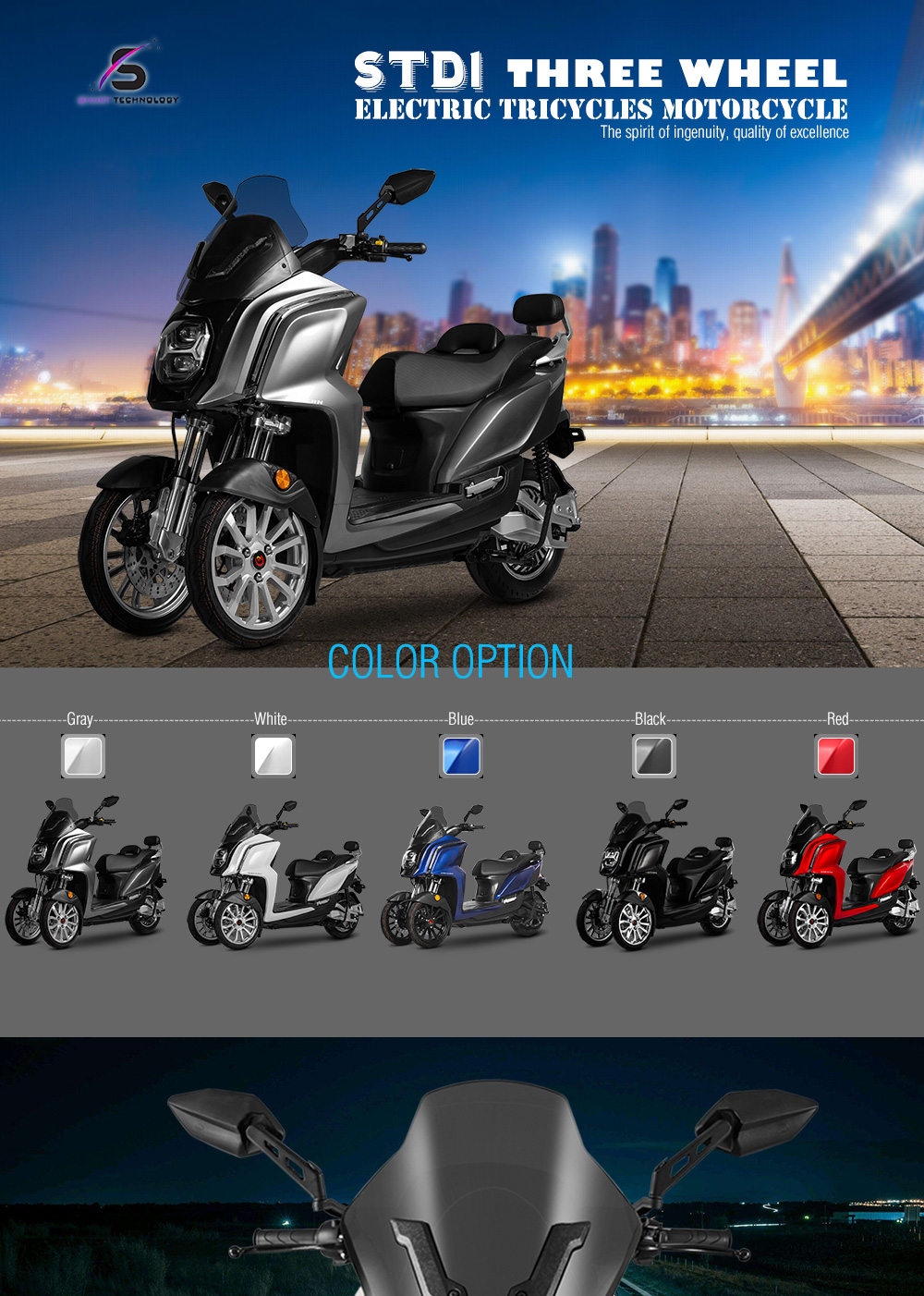 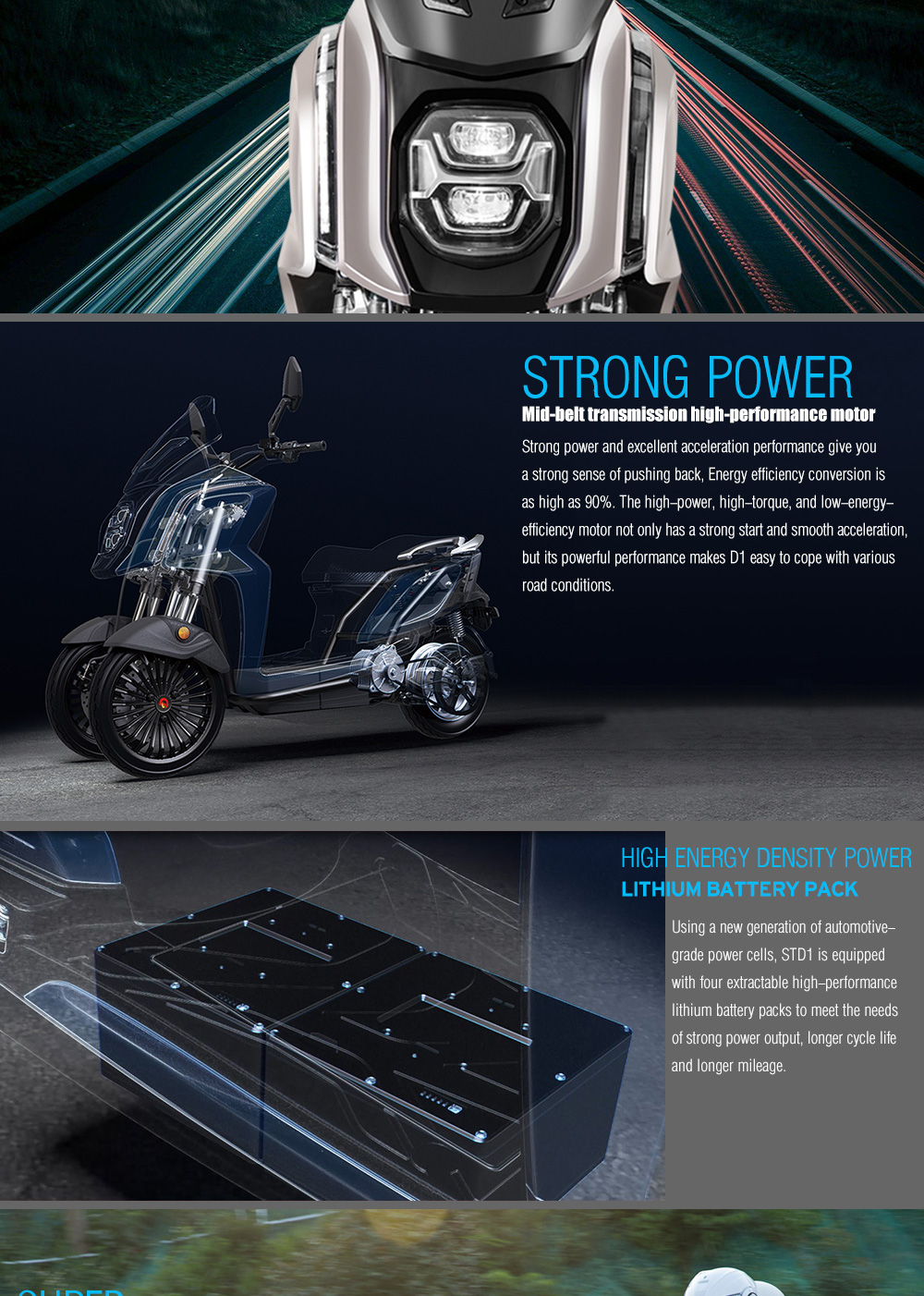 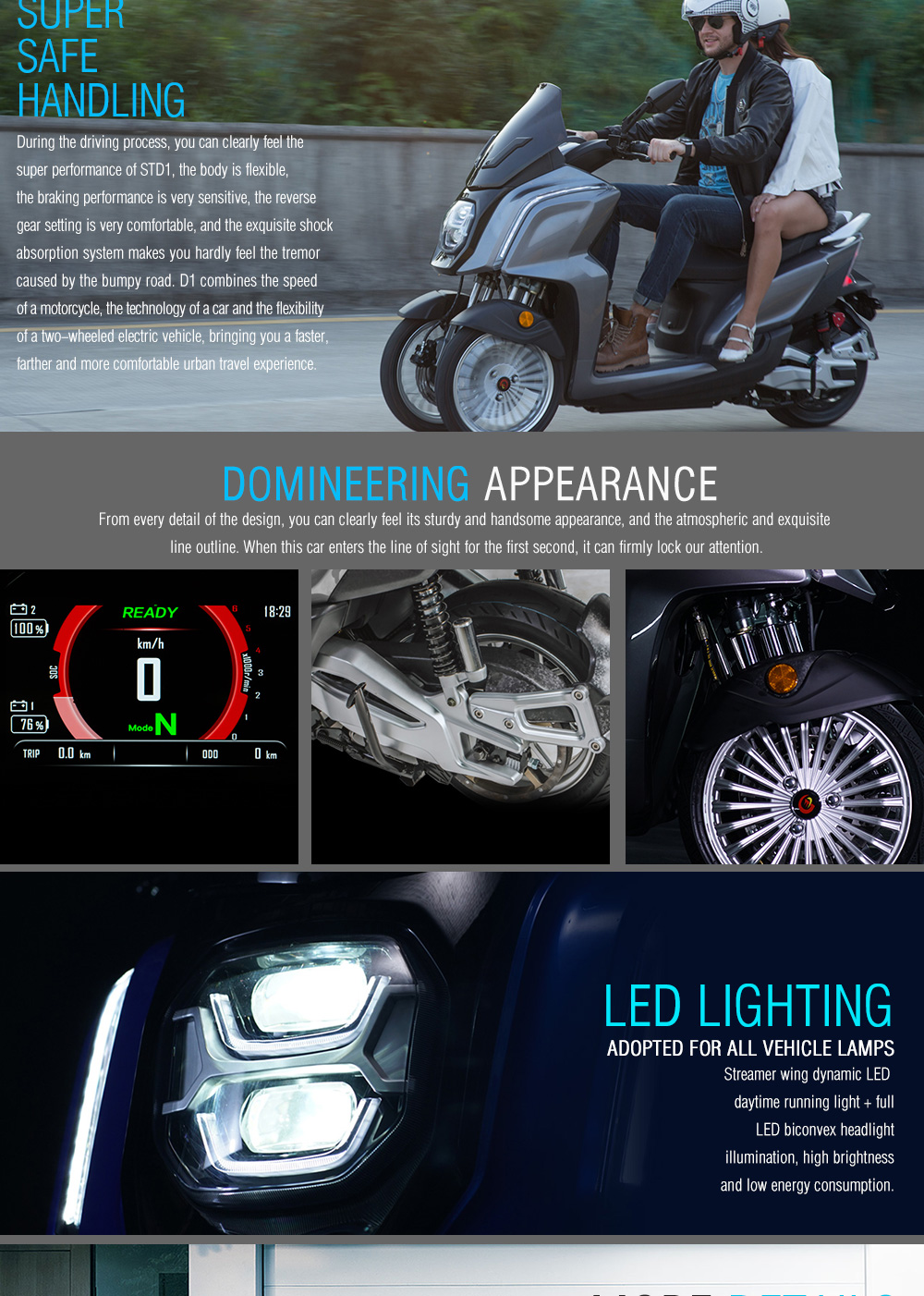 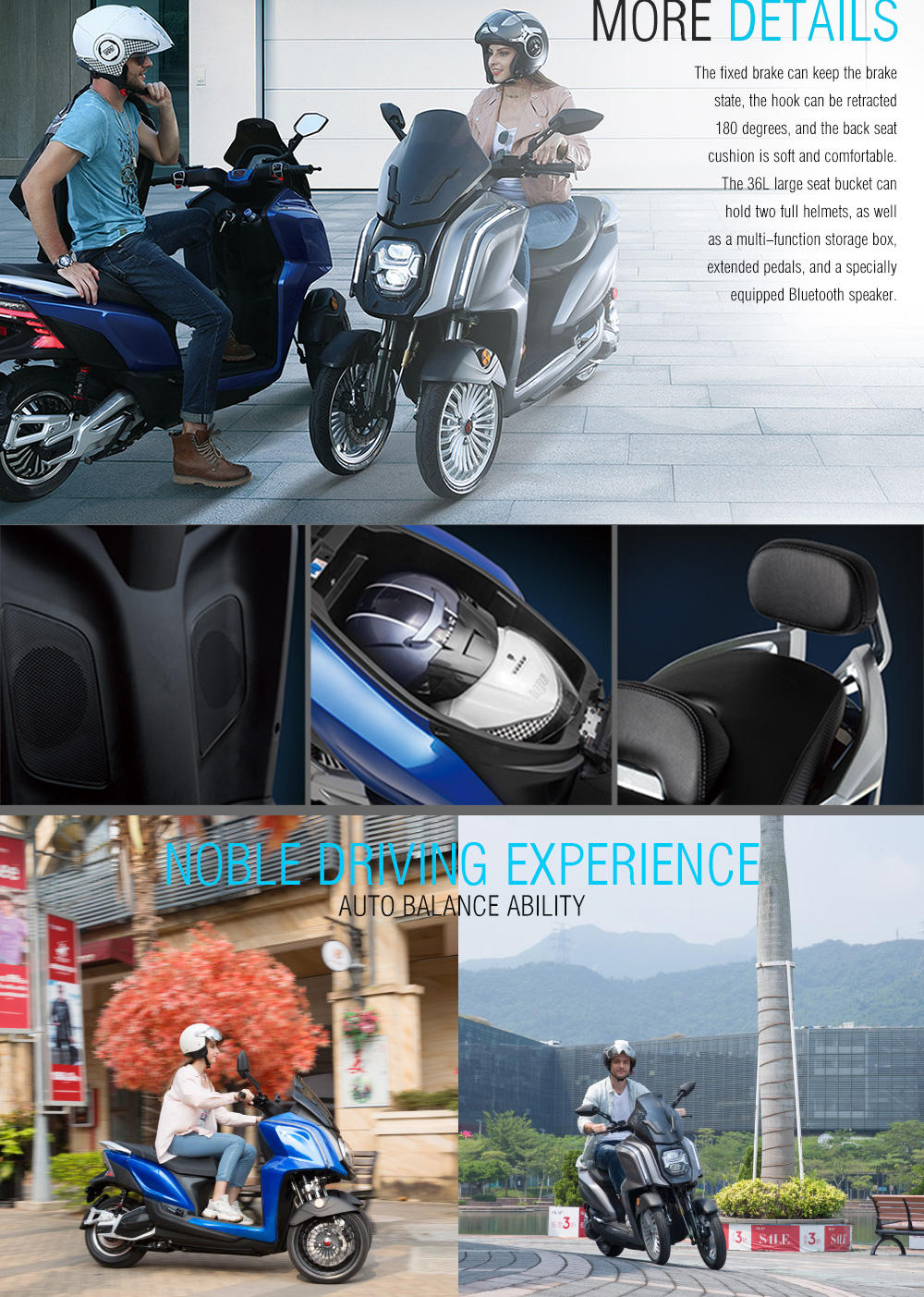 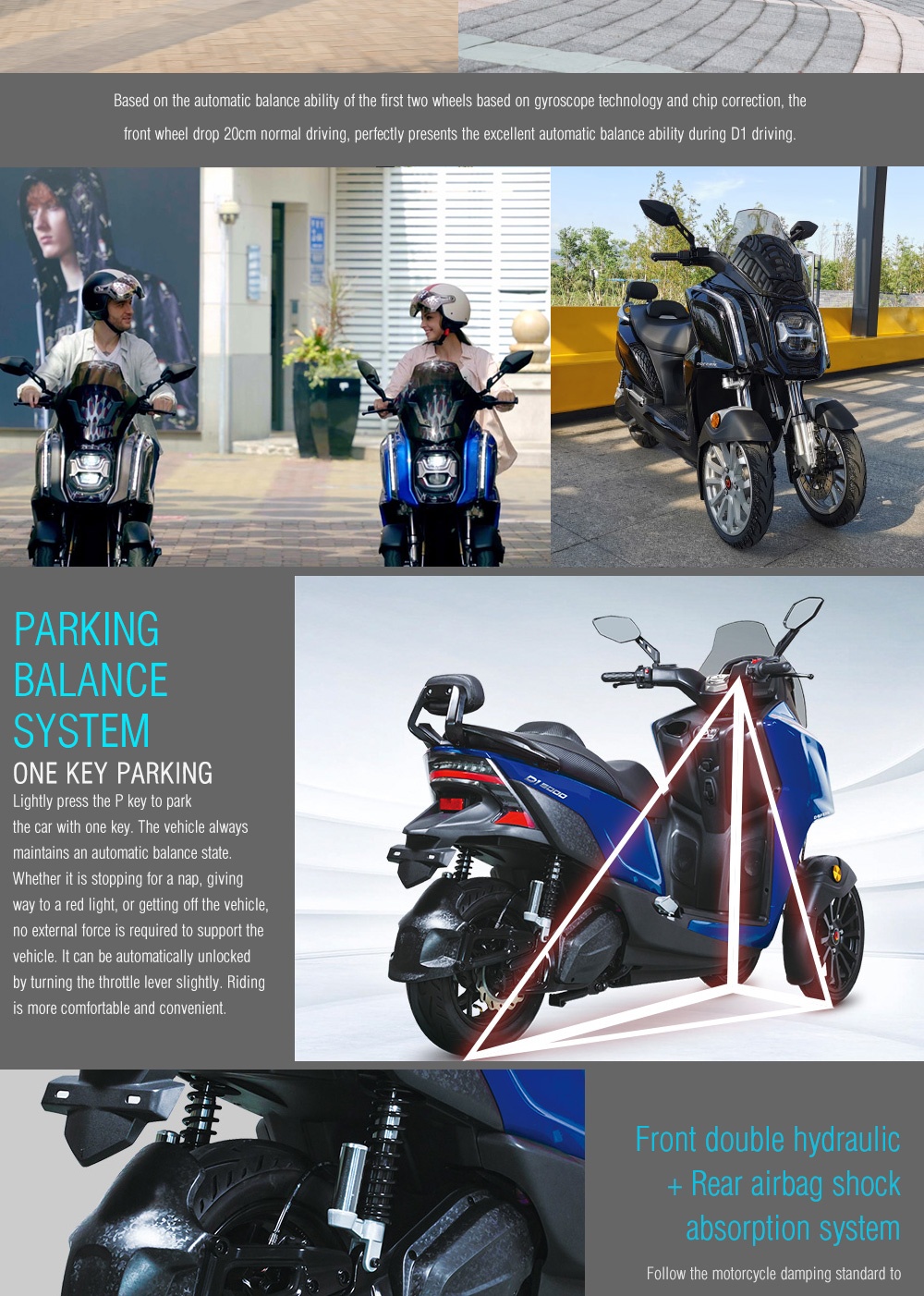 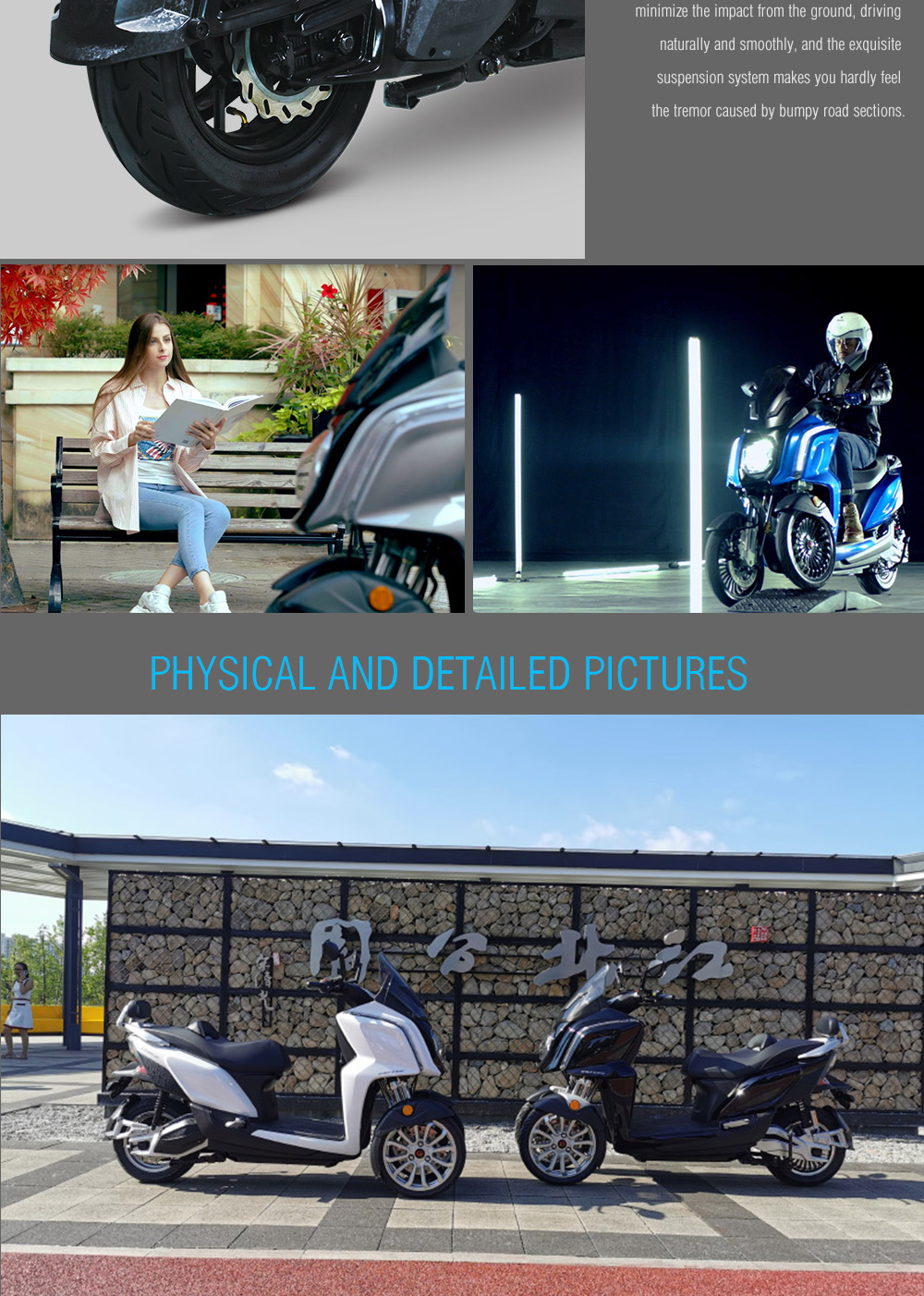 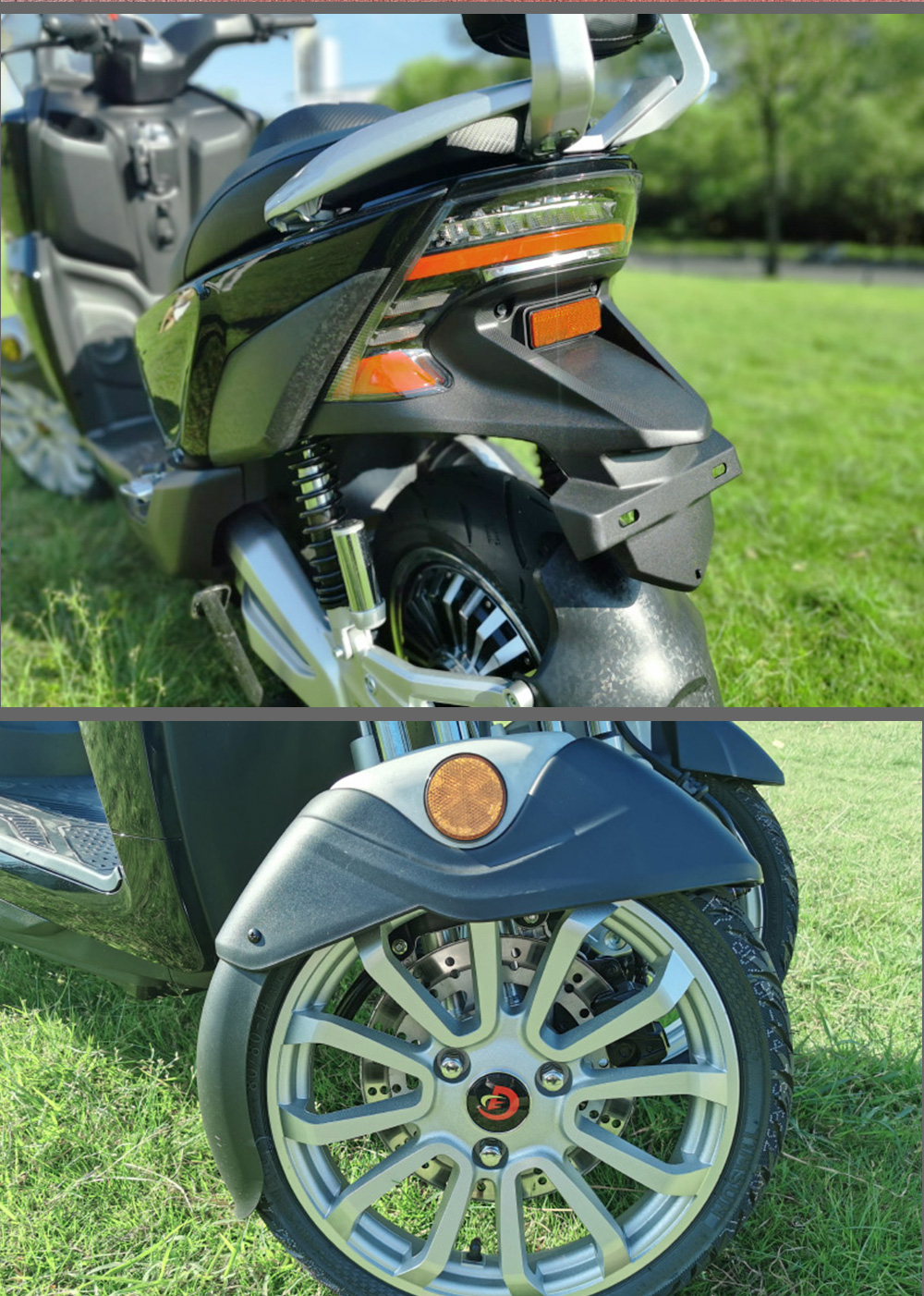 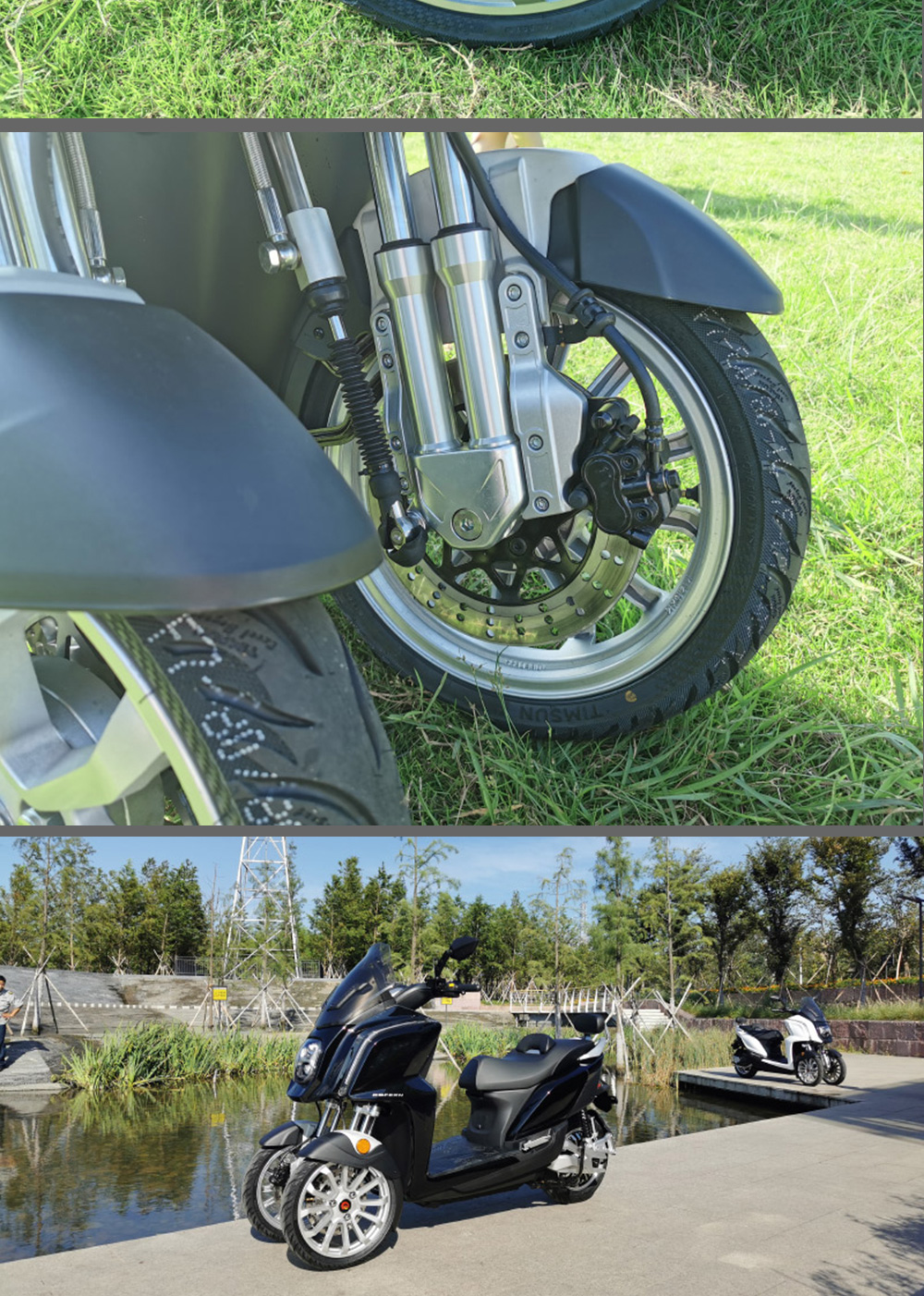