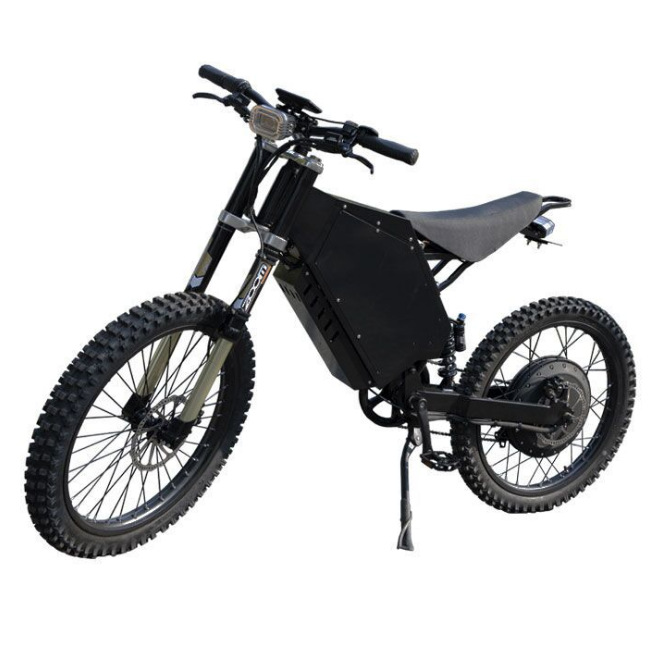 Can an electic bike go 60 Mph?

Generally electric bikes (also called pedelecs, or pedal-assist bikes) have the same approval as conventional non-electric bikes. Some of the electric bikes, which have motors capable of going up to 45 km/h (28 MPH), they are called s-pedelec or speed bikes.

European legislation prohibits their circulation on public roads, limiting their use to mountains or offroad tracks, unless they are registered, which would mean complying with regulations similar to that of a moped.

However, there are a few electric bike manufacturers have chosen to ignore the definition of an E-bike and create a fast ebike. For example, Delfast Top 2.0 or Top 3.0 both have same top speed of 50 MPH / 80 KM/H.

The Secutronic 8000W Stealth Bomber ebike is a 60 mph and 120 pound monster capable of going 45 – 50 miles per battery charge (on smooth terrain and moderate speed). It has acceleration per amps and performance for most users… and the truth is that it can terrify you.

The stealth bomber electric bikes have simple and concise lines, and the steel body reveals some sturdy feeling. They look more like electric motorcycles, but just with bicycle pedals. You can move forward with pedals even if the battery runs out.

What is the difference between a moped and an electric bike?

These are the differences between electric motorcycles and electric bikes:

Electric motorcycles and electric bicycles have become the ideal vehicles to move around big cities – or outside them – quickly and ecologically. However, there are differences between the two segments.

To drive a motorcycle you need a license and insurance in order if you do not want to have problems with the law, which is an added expense. On the contrary, battery power electric bicycles do not need a driving license or insurance, although it is worth taking out specific insurance for what could happen.

Electric moped must necessarily circulate on the road shared with cars and other vehicles, although we can also circulate with them through authorized forest paths. With electric bikes, in addition to circulating in the same places as the moped, you can also pedal through lanes reserved exclusively for cyclists.

However, with a bicycle we cannot travel on highways or motorways, and with a motorcycle, as long as it is not a moped. Regarding urban traffic, the bicycle may have a certain advantage in this section since it is lighter, more agile and can circulate in exclusive lanes, thus avoiding possible traffic jams.

Surely it is the most obvious point, but surely there is someone who still has doubts. Electric motorbikes work simply with the force of the electric motor driven, generally, through the right handlebar. Electric bikes work with pedals, although with assistance.

An electric motorcycle is cheaper to maintain than a combustion motorcycle, despite the fact that the price is, for now, somewhat higher. On the contrary, the electric bicycle is the cheapest to maintain, as we have seen for example in the case of insurance. In addition, wear parts are cheaper on bicycles as well. Likewise, the purchase price is also lower on bicycles.

In both cases , parking is very comfortable since we can do it in spaces enabled for it or, in the case of motorcycles, even on the sidewalks.

In both cases, going from one point to another is done quickly and safely , but the moped can be our great ally if the journey is uphill, since we will not have to make any kind of physical effort. On the contrary, the bicycle can be uploaded to different public transport, thus becoming a mobility complement. What both segments do share is that if the weather is not good, driving is almost impossible.

As a general rule, motorcycles can carry up to two people , thus being able to share the trip with another person and save some expense, but bicycles can only carry one person, except in cases such as tandems.

Broadly speaking, electric mopeds have much more autonomy than electric bicycles, so we will have to recharge them less frequently. In the case of motorcycles, we can recharge them at public charging points or at home, but we can only recharge bikes at home.

Generally, electric bicycles are limited to 25 km/h, while electric motorcycles have higher speeds up to 45 km/h.

However, the Secutronic Stealth Bomber ebike with pedals and 8000W high power hub motor can reach speed at 60 mph.

If you want a super-fast, reliable electric bike, turn the key and get ready to ride; If you have money to spend, we highly recommend the Secutronic Stealth Bomber 8000W 60 MPH electric bike.

The Stealth Bomber 60 MPH ebike are at the forefront of e-bike technology, highly respected in the e-bike community for their build quality and great performance. They are at the top of their category, within the top 10 electric bikes of the future , meaning they are rare examples of bikes built from the ground up.

From the appearance, the whole e bike combines the styles of electric bicycles and off-road motorcycle well, and the streamlined appearance is simple and has some sci-fi feeling.

Secutronic 60 Mph Ebike has three riding modes, electric + power assistance + manpower. It is great for the riders to mix their riding styles.

Generally a 8000W ebike is with an operating range arround 37 Miles with a full recharge. With 72V 40Ah Samsung Lithium Battery, this Bomber Electric Bike can reach range of 50 – 55 miles.

It adopts Zoom Front Fork and DNM brand high quality rear suspension. Tuned and spec’d by the Secutronic stealth team before shipping, This Chinese Stealth Bomber Ebike is a very good all-round package for riders without feeling that it compromises in any field.

Disc brakes consist of a brake disc attached to the wheel and a caliper on the edge of the disc. Precise braking effects fromhe high pressure brake fluid pushing the brake pads, and brakes clamping on 203mm rotors of the brake discs.

Secutronic stealth ebike proposes an optimization method for the distribution of electric motor and mechanical braking force for the hybrid system in which the braking force of the front and rear axles is kept fixed, and the regen braking which recovers 16% higher energe than that of the fuzzy control, enhancing range and ride time.

The bikes adopt special saddle for electric dirt bikes. It has a longer seat cushion, and more in line with the mountain riding needs. A motorcycle saddle is available to custom.