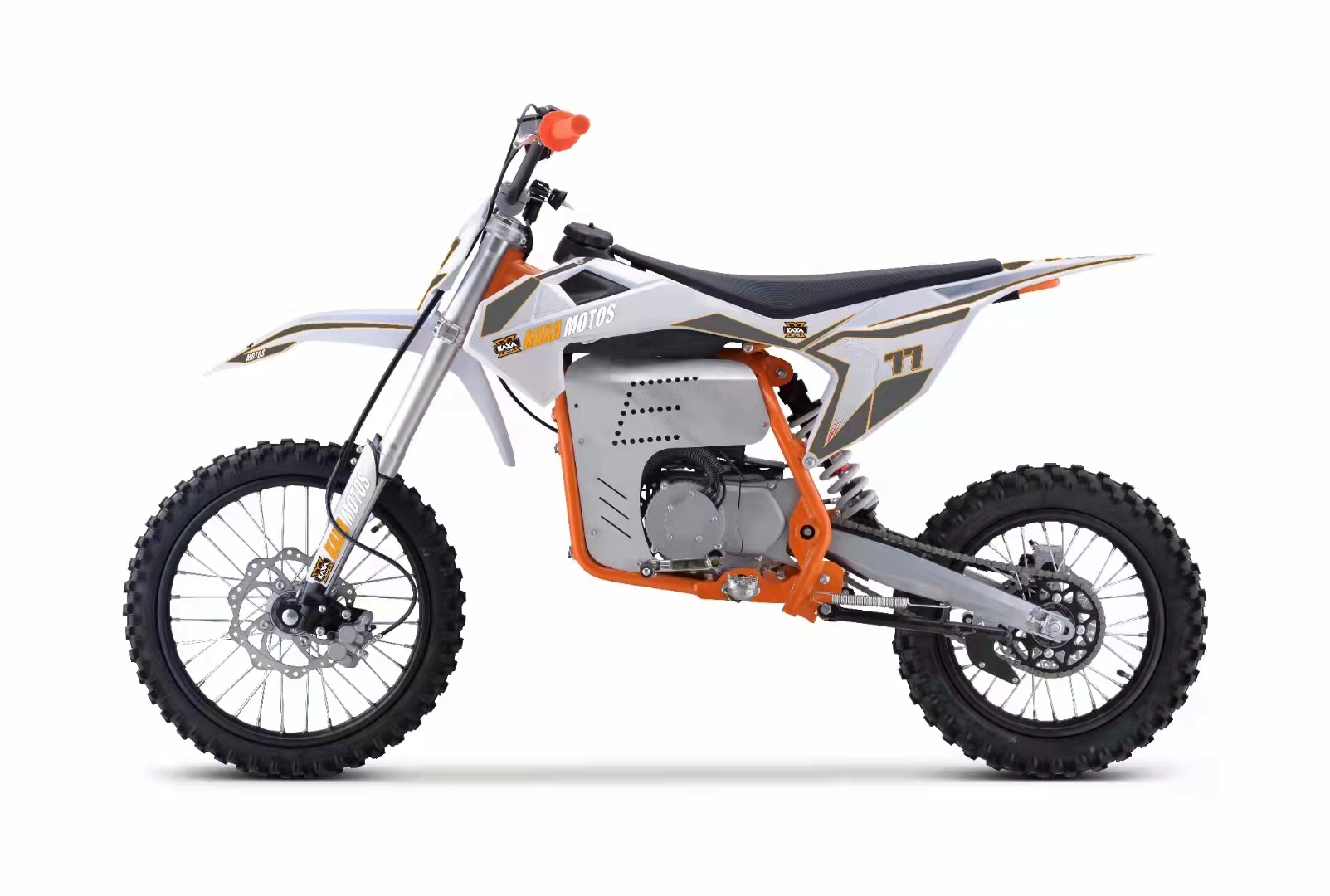 Many countries are gradually banning gas powered motorcycles (including cars). Although electric is not the best clean energy at present, manufacturers have to make compromises without finding a better alternative energy. After all, in order to survive, they can only turn to electric.

At the same time, the electric motorcycle has low heat source and no fuel, and can be transported anytime, anywhere. No startup required and can be used immediately.

In recent years, with the development trend of electric vehicles, electric off-road bikes have not only entered the civilian market, but also entered the military motorcycle market. The military favors electric dirt bikes for their quiet, eco friendly, low heat, and ease of maintenance. For example, recently the armies of many countries have conducted exercises and tests of electric off-road vehicles, including the British airborne troops, and the model selected is China’s horned Sur Ron light bee X.

How much does a electric dirt bike cost?

And the AdmitJet from Secutronic has a top speed of 46.6 mph and a range of 37 miles. Performance is similar to Electric Motion or Segway Dirt Ebikes, but at 1/3 to half the price.

Legality of Electric Dirt Bikes Around the World

Technically, electric dirt bikes are not motor vehicles because they are neither bicycles nor motorcycles, although they have electric motors.

One issue affecting the road legality of electric dirt bikes is whether the vehicle is legally used and parked according to local regulations. This varies by cities.

For example, Singapore classifies electric bikes as Personal Mobility Devices (PMD). Allow them to travel at top speeds of 10 km/h on sidewalks and 25 km/h on shared paths (bicycle use). Driving only on sidewalks is prohibited. The weight of the ebikes must be less than 20kg and the width must be less than 70cm. Obviously it not road legal in Singapore for electric dirt bikes.

Meanwhile, South Korea’s Road Traffic Act classifies the electric dirt bike as a motorcycle. And require to wear a helmet while driving on the road. Entrants must be at least 16 years old and hold a two-wheeled motor vehicle driver’s license.

Electric Dirt Bikes and other battery powered vehicles are considered e-bikes under Japanese traffic regulations. Therefore, it must be equipped with a license plate and side mirrors.

The legality of ebikes is different in the US: West Hollywood, California bans ebikes on sidewalks. Columbia, South Carolina, implemented a one-year ban starting in January 2019. In Nashville, Tennessee, electric motorcycles are completely banned.

After the ban on electric bikes in December 2018, the Madrid government changed its tune. With 18 of the 25 companies that applied for licenses being granted licenses for 8,600 ebikes.

In May 2019, Germany lifted its ban on the electric dirt bike, allowing it to be used on roads and bike lanes. But its use on sidewalks is prohibited. Riders must be at least 14 years old and maintain a speed limit of 20 km/h.

Currently, it is illegal to use electric motorcycles or e dirt bikes on public roads in Ireland. Because they are classified as “mechanically propelled vehicles” and are subject to regulations such as road tax and insurance.

But, this era is about to come to an end.

Electric bicycles have become an increasingly popular form of personal travel. Many countries are considering new bills to allow e-bikes to be used legally in public places and to set safety standards that off-road vehicles must meet.

The legislation will clearly define how and where e-bikes and e motorcycles can be used. These vehicles will not be required to pay taxes, insurance and a driver’s license.

In recent years, with the influence of technology and energy situation, electric vehicles have developed rapidly.

For AdmitJet, the most important philosophy is to dare to innovate, therefor, they always creat excellent new off-road dirt bikes in this field. AdmitJet has been focusing on the design and development of electric components for electric dirt bikes for several years. Finally the AdmitJet ST-EDB3 was launched.

The frame and chassis of the AdmitJet ST-EDB3 are designed by dedicated engineers. Seat height is adjusted by the PowerParts height adjustment kits of this bike. Therefore, the bike is suitable for riders of all ages, and has excellent performance in off-road riding.

In terms of body safety configuration, the AdmitJet ST-EDB3 is equipped with a suspension system from WP. The front and rear are XACT 35 inverted front forks and XACT rear shock absorbers.

In terms of braking, both front and rear are equipped with disc brakes. In addition, the e dirt bike has cast aluminum pedals and a tapered handlebar. The entire body shape looks very similar to the Electric Motion Escape model.

This electric motorcycle is positioned as an entry-level adult electric off-road dirt mountain bike. Its power system is set up with 3 riding modes, allowing drivers to have a variety of off-road experiences. In addition, this dirt bike is equipped with a 60V 20Ah lithium ion battery pack. There is a solid casing around the outside of the motor for protection. So this off-road motocross has a smooth powertrain, great handling and great performance on racing.

AdmitJet has a professional team, coupled with the brand’s original technology and strength. The launch of the ST-EDB3 dirt bike means that AdmitJet brand has begun to enter the field of electric motocross. Let’s take a look on the performance of this dirt ebike in the field of electric vehicles. 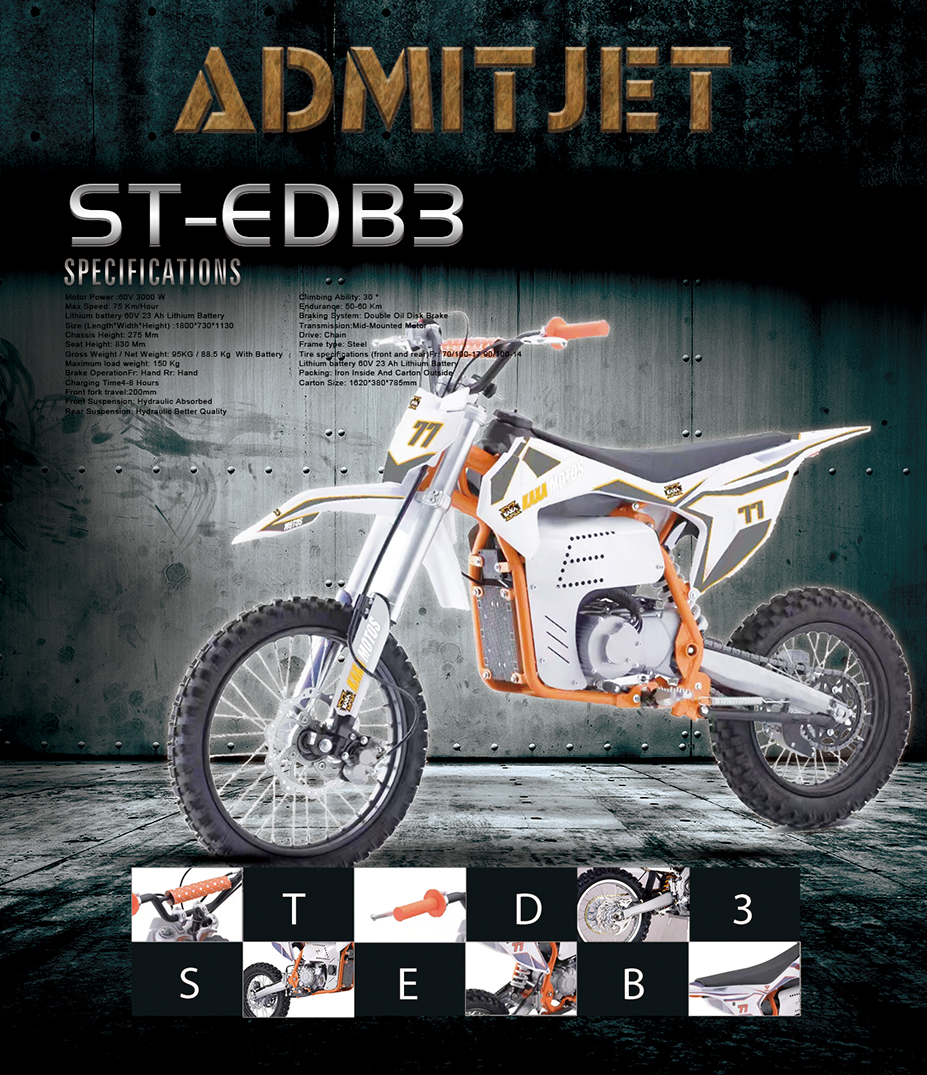 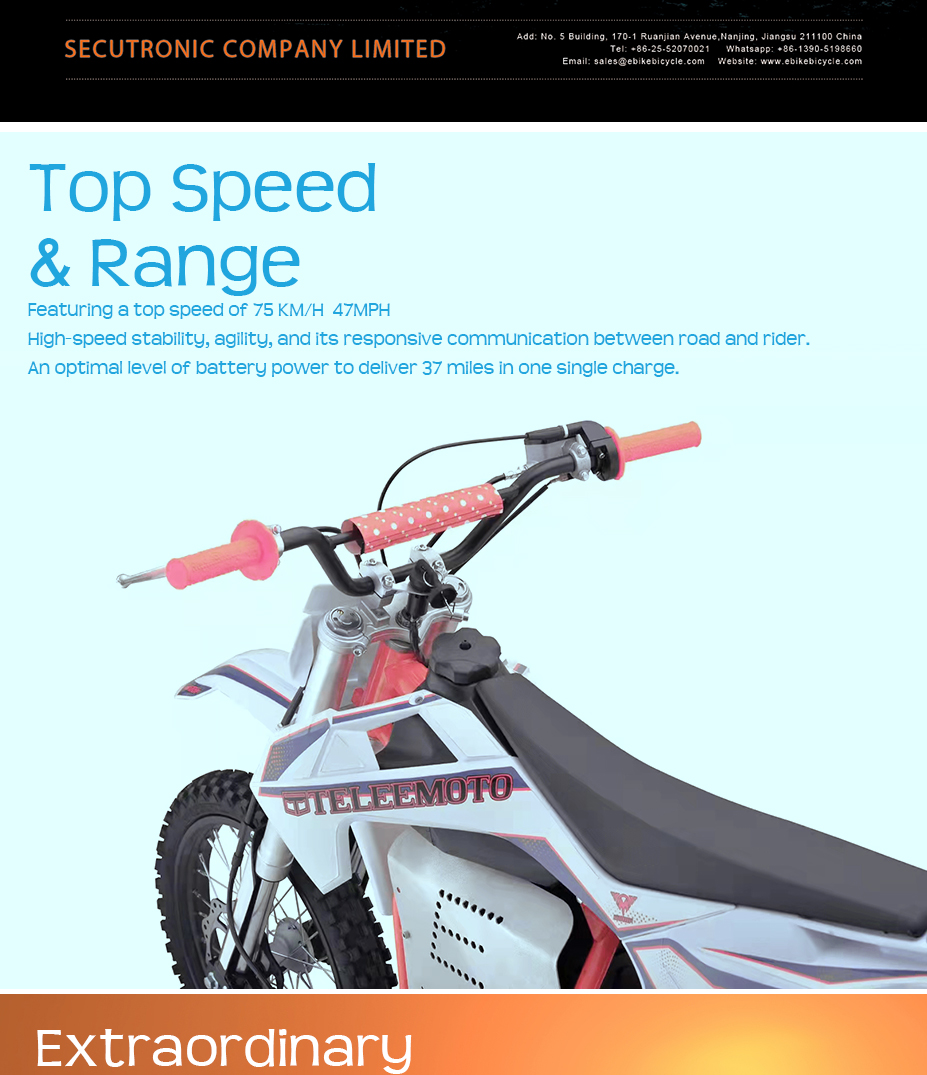 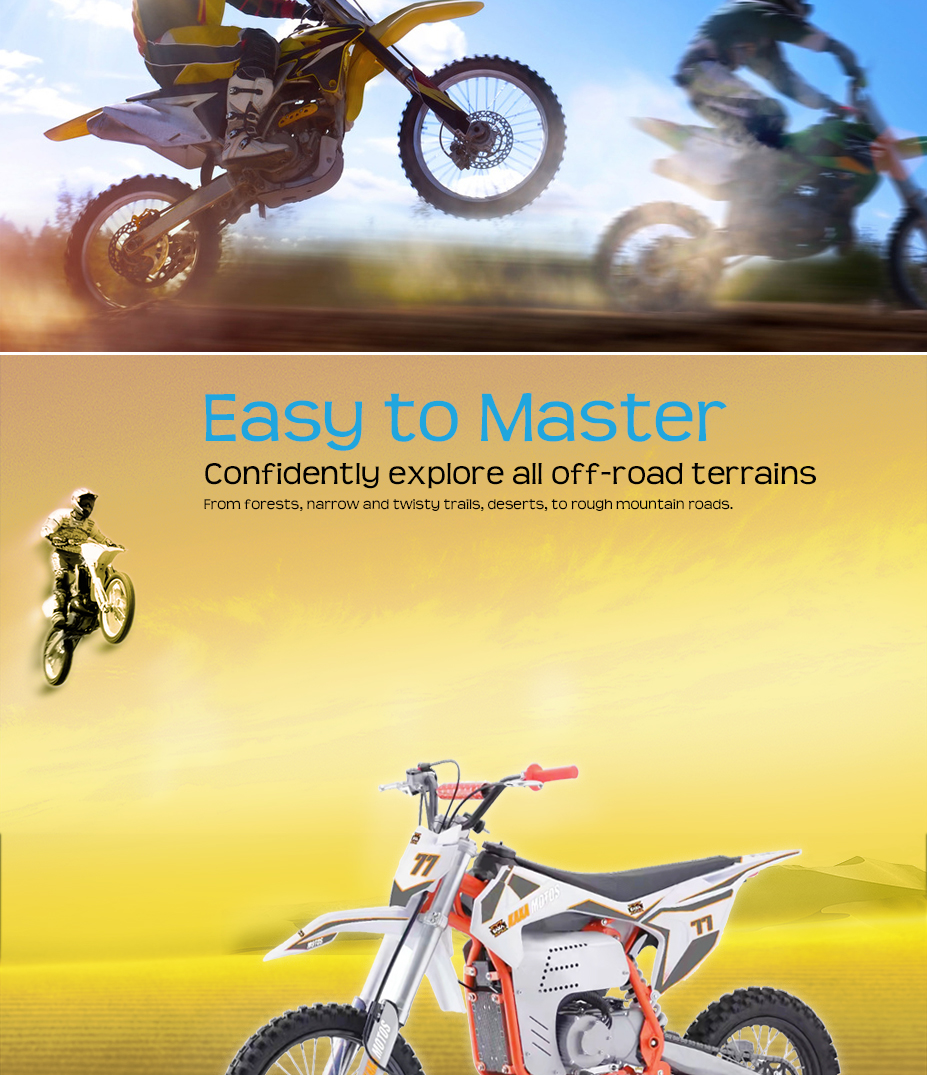 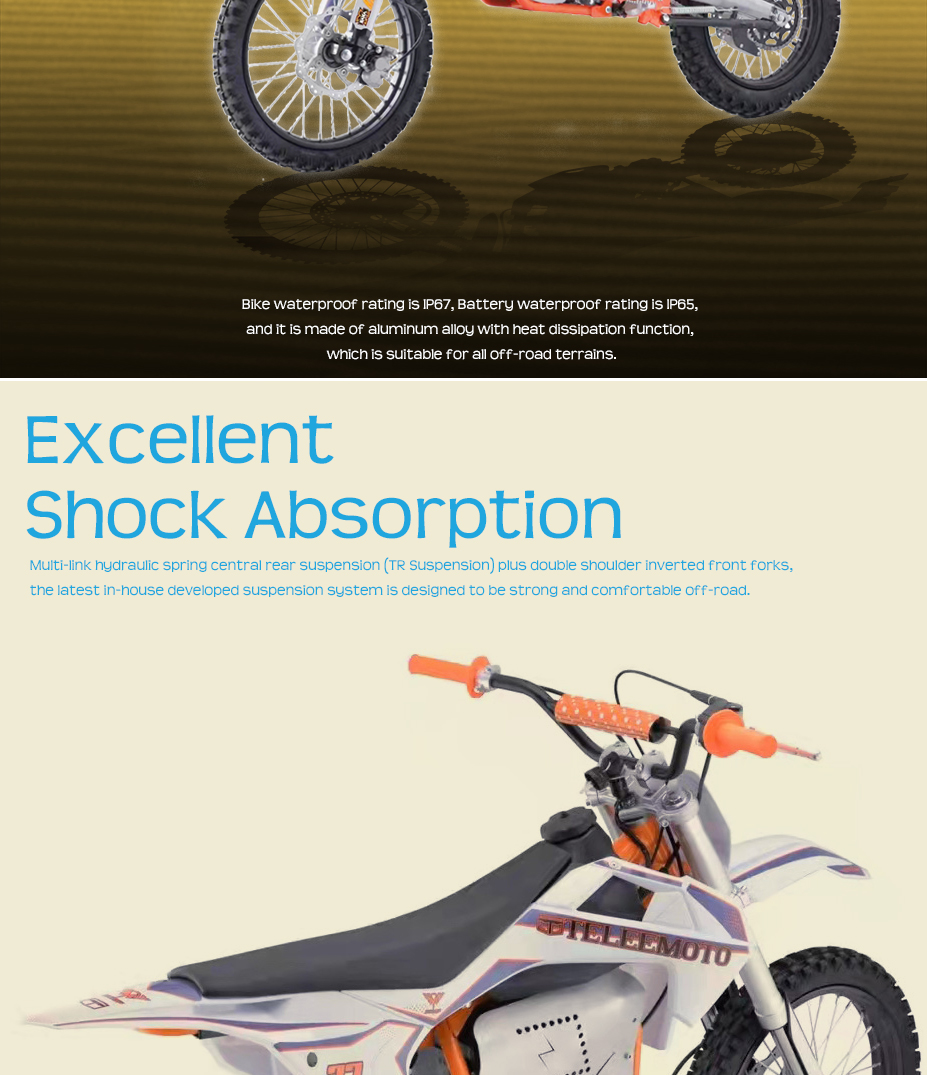 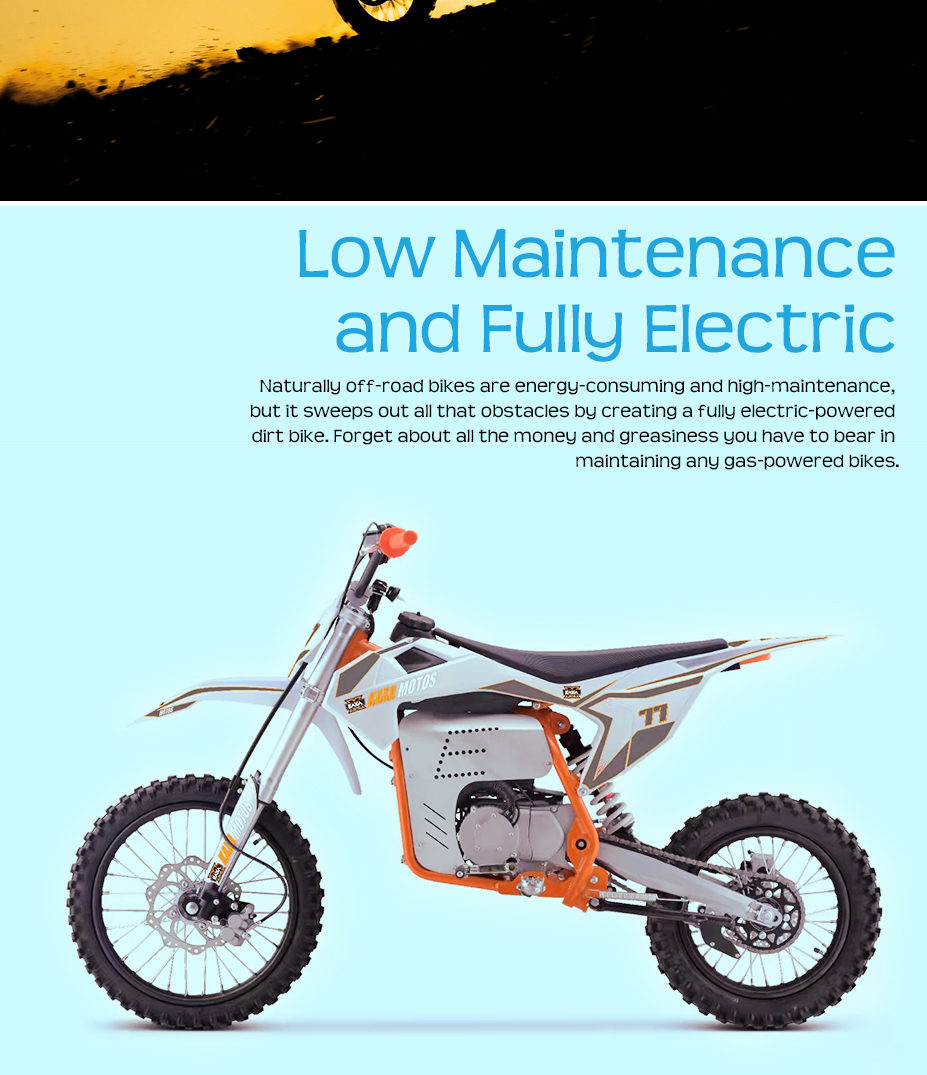 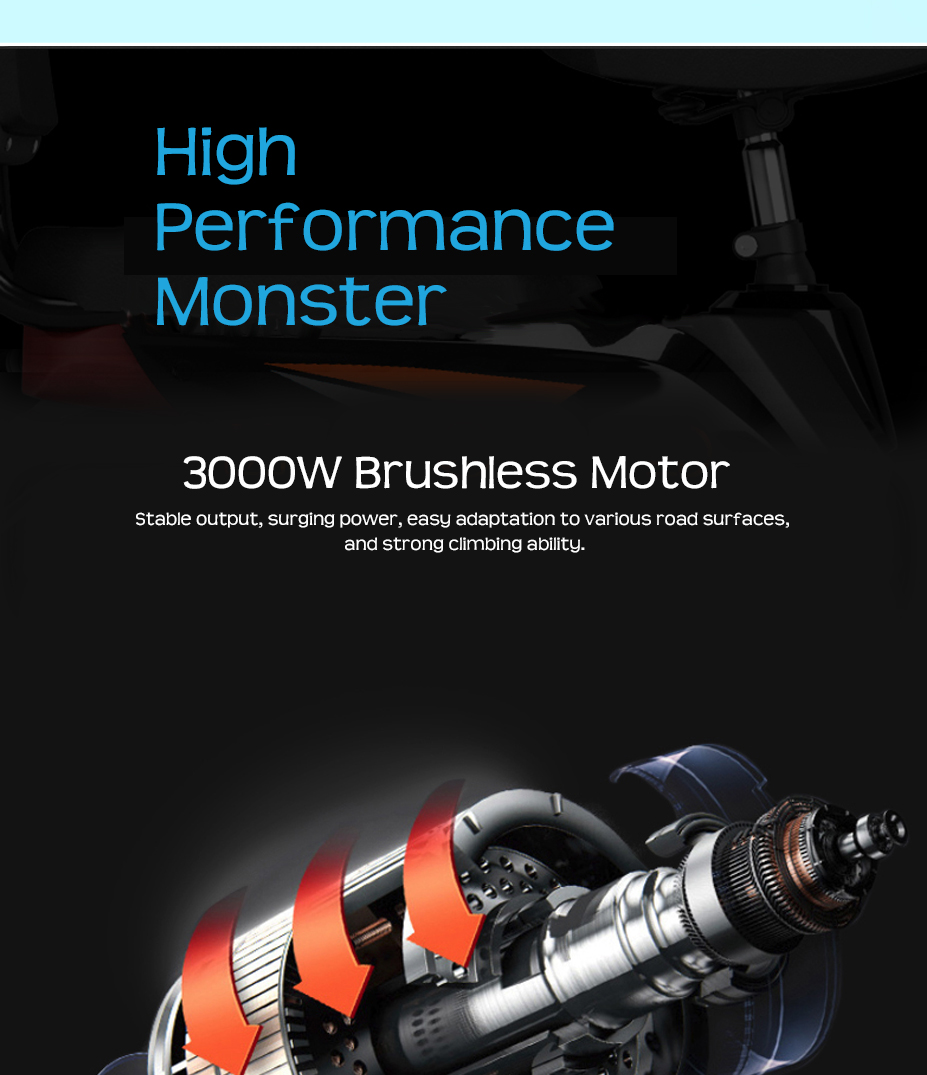 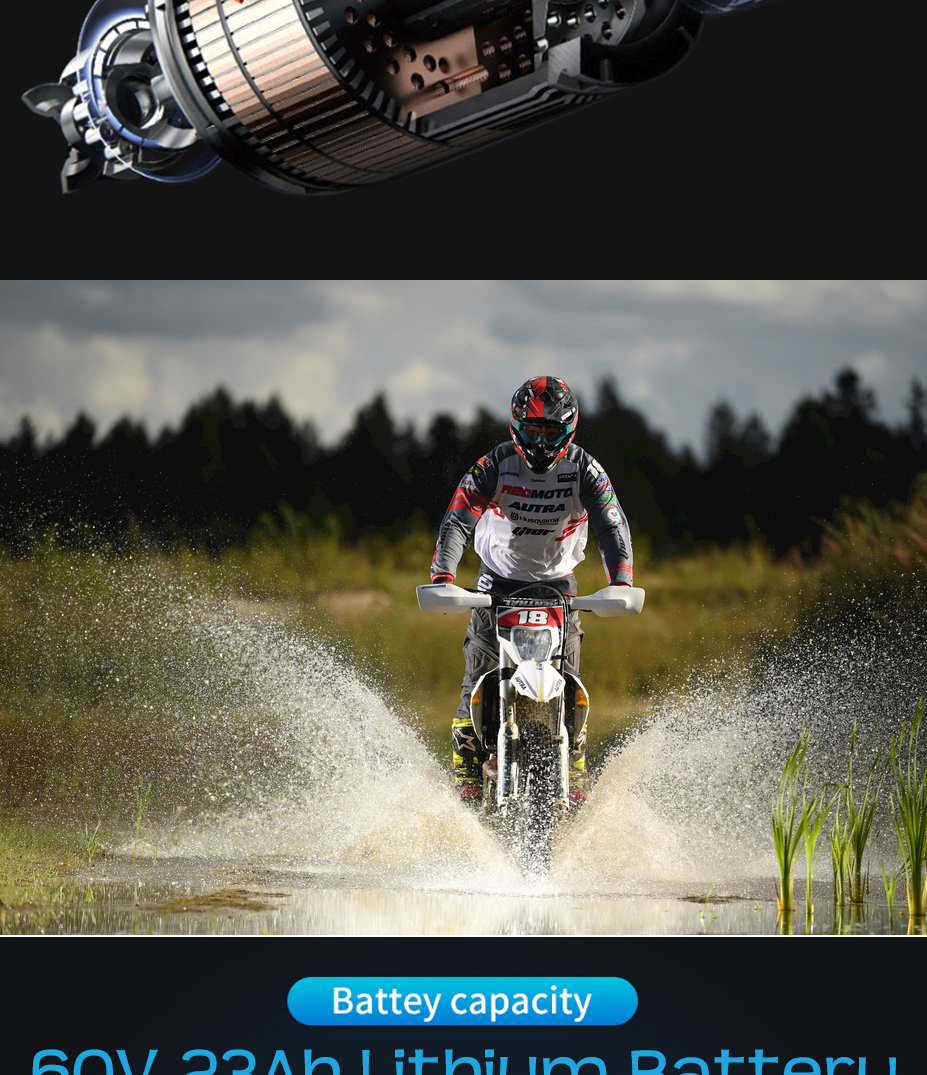 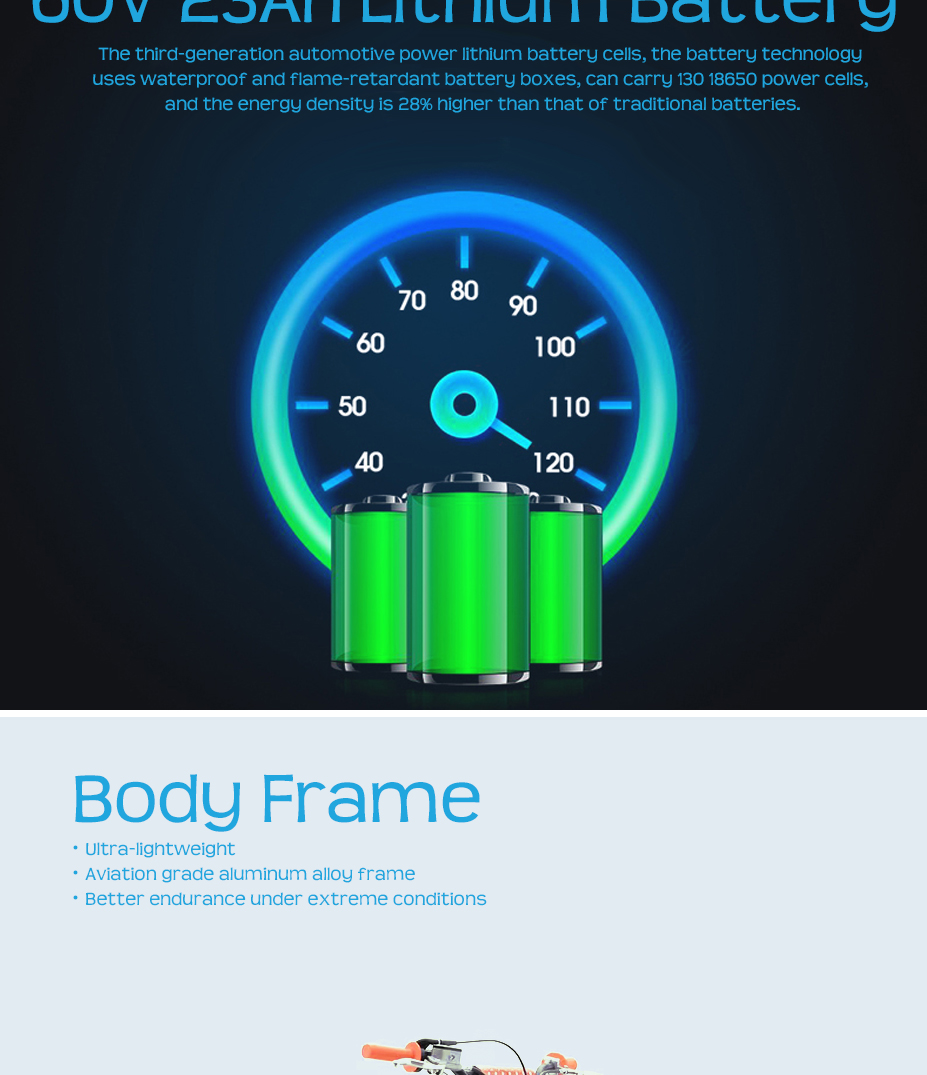 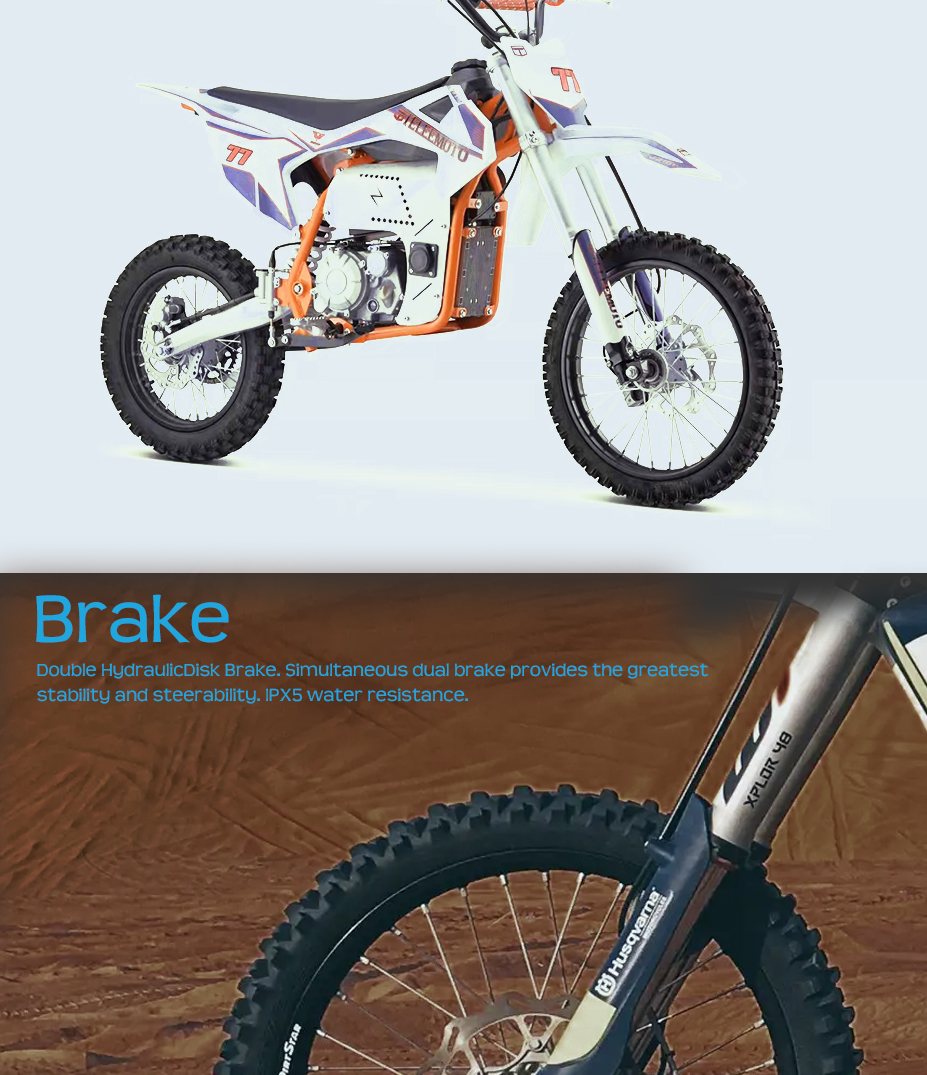 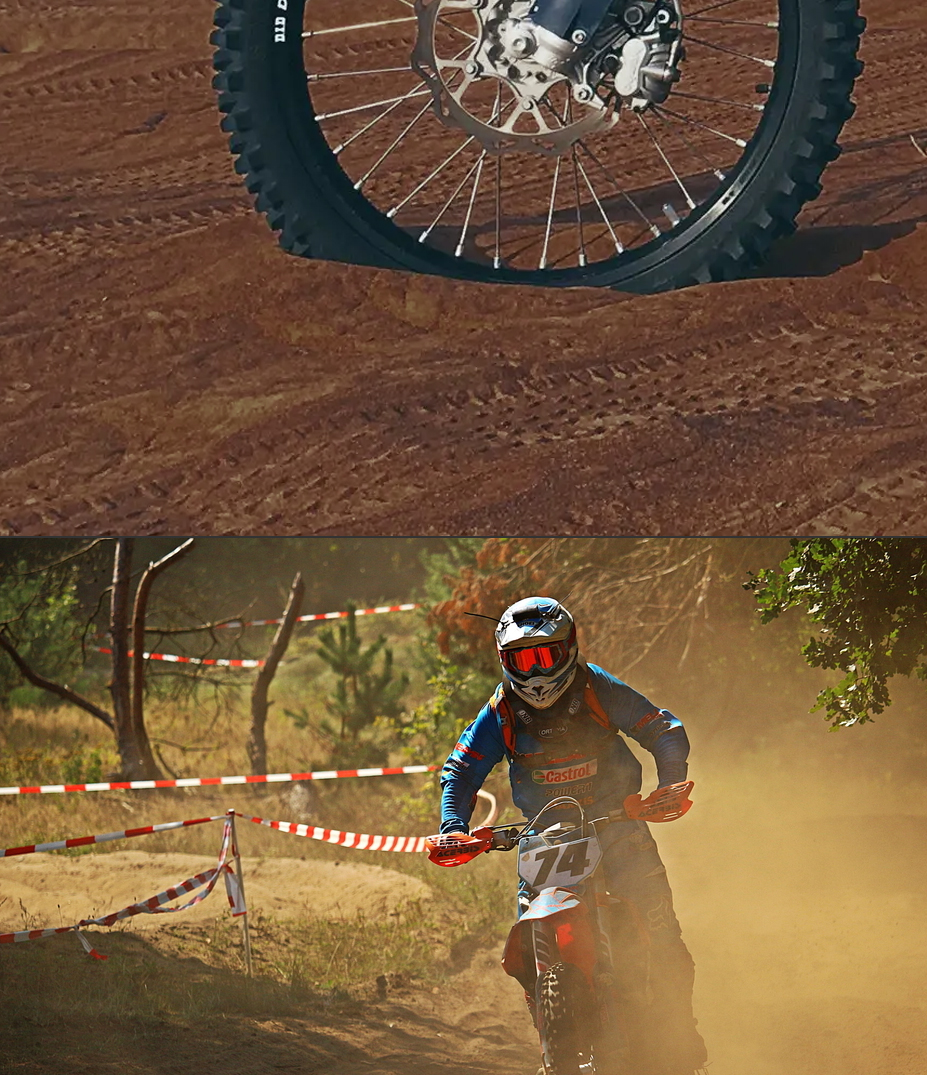 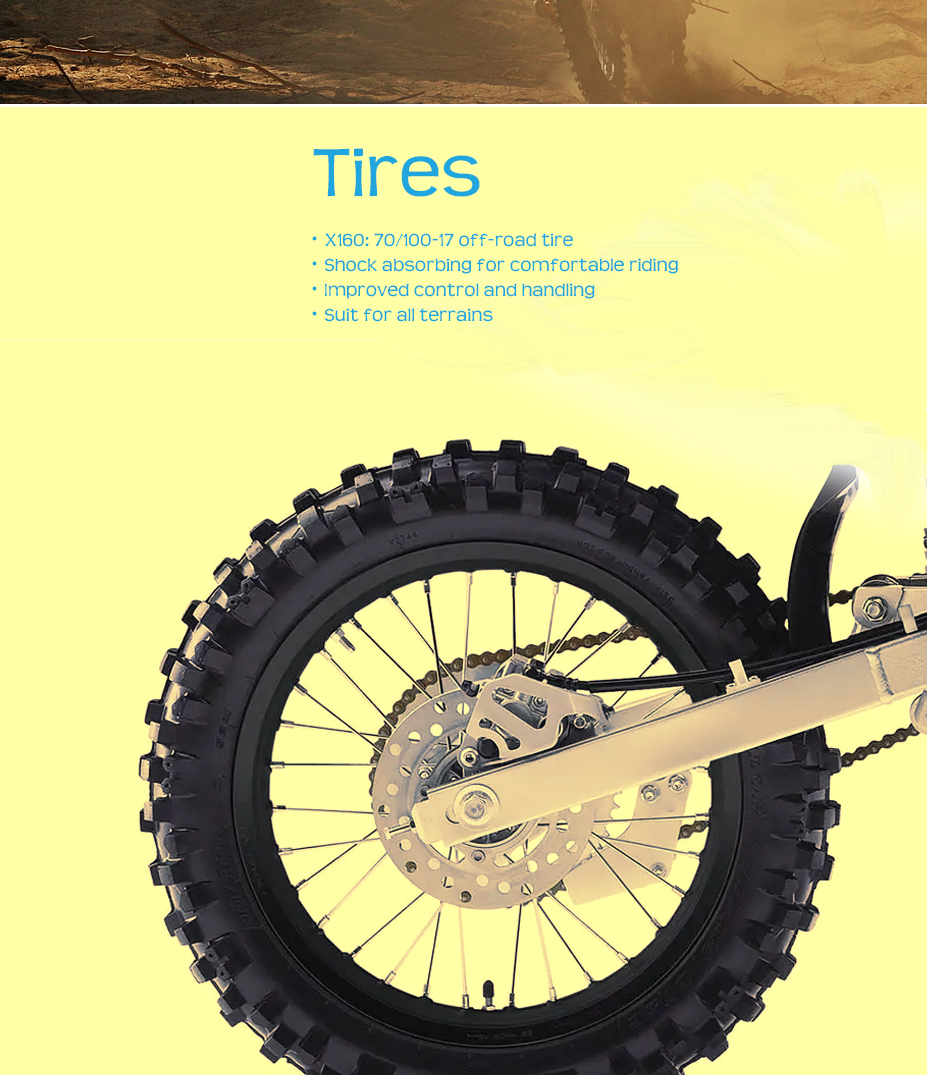 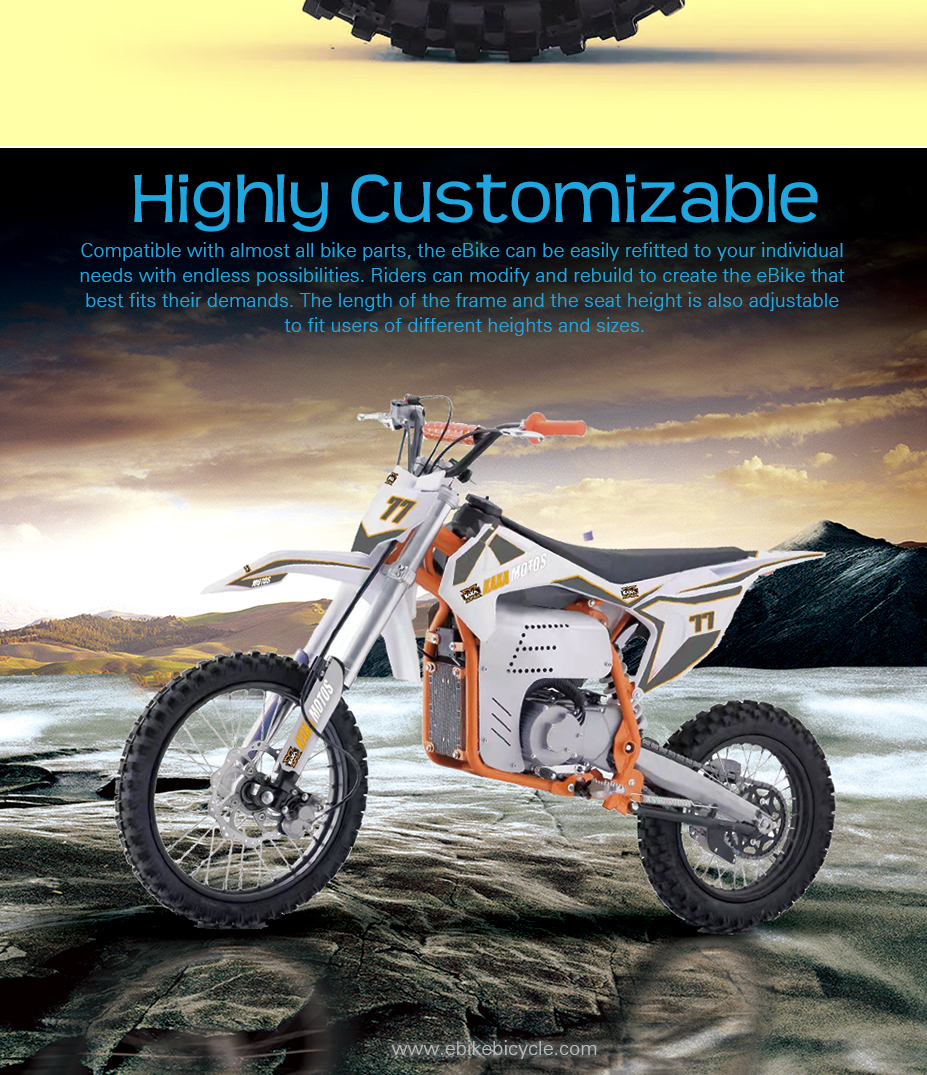