Why not just buy a traditional dirt bike?

Even the AMA has recognized biciclette elettriche’ growth in America and has started to organize electric enduro bike races.

In order to develop the electric two-wheeled vehicles, it is necessary to solve the problem of battery life. It is particularly important to everyone, especially for some users who pursue motorcycle travel.

The battery life will determine whether they will accept the hard conditions of electrification, such as Electric Motion Escape, the performance in this regard is not very good. Under normal circumstances, it can only provide about 70 kilometers of battery life. If the extreme use state is maintained for a long time, the value will drop significantly.

However, compared with gasoline vehicles, the inherently strong torque of electric vehicles is very suitable for off-road conditions, and the handling experience is even better. This is why many well-known brands and start-up brands have set their sights on off road motorcycle market.

After several years of accumulation, the global electric motor bike category has begun to show a real explosive trend, and many series products similar to motorcycles have been formed. In the future, Secutronic will also bring more high-quality products, making everyone more Directly and systematically feel the charm of electric riding.

Gas Dirt Bikes vs. Electric Dirt Bikes for Adults | Which One to Choose?

8 advantages of electric dirt bikes when compared to gas one.

If you’re all about performance, electric motorcycles have a clear advantage over gas motorcycles.

Gas powered engines take longer to hit peak power and deliver maximum torque – both of which require the engine to be spinning at a high RPM rate. On the other hand, battery powered electric dirtbikes can reach their peak power and torque instantly from 0 RPM.

An experienced rider will know that gas motorcycles are fiddly and frequently require tinkering and maintenance to keep them running without problems.

Ongoing maintenance takes away from the most enjoyable part of owning a motorcycle: riding. Thankfully, as electric motocross bikes don’t have pistons, valves, oil, carburetors – or any other component that may need your attention – they are extremely low maintenance.

Keep it charged, keep your tires pumped, and enjoy the ride!

3. ELECTRIC DIRT BIKE SAVE YOU MONEY

A myth that surrounds electric moto cross is that they are far more expensive than gas-powered motorcycles. While they are some expensive right now, some electric bike manufacturers including Secutronic are introducing business models that turn motorcycle ownership on its head and pass the savings onto the consumer.

4. ELECTRIC MOTOBIKES ARE MORE COMFORTABLE THAN GAS ONES

First off, there’s the vibrations. Gas bikes vibrate while you’re riding and while you’re waiting at the traffic lights. While this issue is getting better with newer gas motorcycles with balancer engines – the issue will never really go away. Electric motorcycles don’t vibrate and keep you at peace – even before you’ve had your first cup of coffee.

A controversial entry to this list but another great aspect of electric enduro motorcycles when compared to gas motorcycles is how quiet they are. The saying that e motos are completely silent isn’t 100% true, however, these noises are minimal – especially when you compare tham to the exhaust noise produced by some gas cruisers.

In 2021, the amount of level 2 and DC chargers on the road has boomed and total ranges have increased across the board. So much so, it’s not uncommon to find electric moto offering a highway and city range of 200 miles.

7. MUCH BETTER FOR THE PLANET

The unwavering and undeniable plus of electric motorcycles is eco friendly, they bring positive impact on the environment. While this has been a benefit since EVs came on the market, it’s more poignant now than ever before.

The shift towards green vehicles is already in the works – from public entities moving towards electric fleets to local and federal governments offering financial incentives to switch to electric vehicles. So, do your part to contribute by going electric!

E Dirt Bikes are not only safer for the planet, they’re also safer for riders, too.

Electric Bikes companies are pushing the envelope when it comes to motorcycle safety. How? By using motorcycle AI and big data to build bikes that are in tune with your surroundings and potential hazards.

Gas motorcycles don’t have the same capability or capacity to incorporate this kind of advanced technology. While you can buy off-the-shelf warning systems for gas motorcycles, they’re usually very expensive and don’t measure up to the built-in safety technology of the electric motorcycls.

Therefore, if you’re looking to practice safe motorcycling, electric is the way to go.

Electric Bikes or e-bikes have the same handle as a regular bike, but they use an electric motor. The electric motor assists propulsion, due to which it is suitable to be ridden for long distances. Still, it becomes problematic when the terrains are irregular and sloppy.

On the other hand, Electric Dirt Bikes have an exclusive design specializing in rugged terrains and irregular roads. You can use them for normal trail riding and pavement riding, but the real fun begins when use in loose dirt, mud, or gravel. These bikes are specially for hitting trails and going deep.

What is the max speed of an electric dirt bike from Secutronic?

For instance, an ebike with a 1000 watt motor can go up to 32 miles per hour. picking the type of bike depends upon you, whether you want a fast e dirt bike or not.

Besides, Stark Future claims that the Stark Varg with electric carbon fiber sleeve motor is the world’s fastest e dirt bike, they don’t actually list a top speed yet.

The KTM Freeride E-XC is another speed demon that runs at up to 60mph.

There are plenty of high-end e dirt bikes from Secutronic that are capable of going at high speeds, the top speed can reach 75mph (120KM/H). 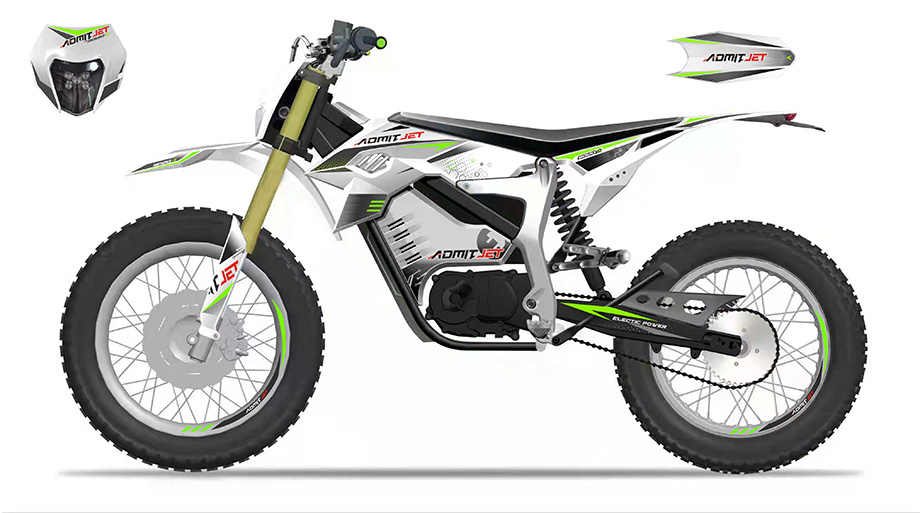 In order to develop the emoto market, SECUTRONIC has launched a variety of new electric dirt bikes, laying the foundation for the future development of electric vehicles.

The most import, the battery has a 50% increase in recharge capacity. It means that a single charge can give you about 1.5 hours of riding, similar range with a full tank of gas on a 250CC dirt bike.

Il 2022 AdmitJet dirt bike both have an IMU which gives cornering-sensitive traction control and cornering-aware ABS.

Secutronic Time E Dirtbike has 4 Gears and 3 Riding modes: Economy, Enduro and Sport. The super off-road capability make our biciclette elettriche suitable not only for beginners, but also for professional riders.

The design of the steel tube frame, the new shape and color matching, plus the new small instrument panel, electric meter, and redesigned key hole, get the bike a new look.

How Much is an AdmitJet Electric Dirt Bike?

Price plays an important role in any big purchase. It will most certainly show up on your pros and cons list when deciding on the best electric dirt bike for you.

As the technology has evolved over the past decade, electric dirt bikes have become more affordable. However, they still only inhabit a tiny share of the dirt bike market. This means that you will struggle to find a good second-hand electric dirt bike.

However, The purchase price of Secutronic similarly powered electric dirt bikes is much lower, only between US$2,000 and US$3,500. Even low priced, the dirtbikes are also fun, quality, and especially available for those with smaller budgets.

We have also Bambini elettrici Dirt Bike with price under US$ 1000.

E dirt bikes also require less maintenance, meaning less costs involved after purchasing the bike. To answer the question of “how much is an electric dirt bike”, we need to look at purchase price and maintenance together. When doing that, over the lifespan of the motorcycle, the costs of an electric dirt bike will be similar to, or not less than a traditional dirt bike.